Along the way in our writing journey, we fall into a slump. (The dreaded writer’s block.) We lose that thing that keeps us going. Whatever that thing was, it was sparked by something, right?

Movies, art, music, television and, of course, our favorite authors and books, all give us something. Something that sticks with us in the back of our minds, whether that be the unexpected plot twist or the graceful storytelling.

And it’s inspiration; defined as the process of being mentally stimulated to do or feel something, especially to do something creative. 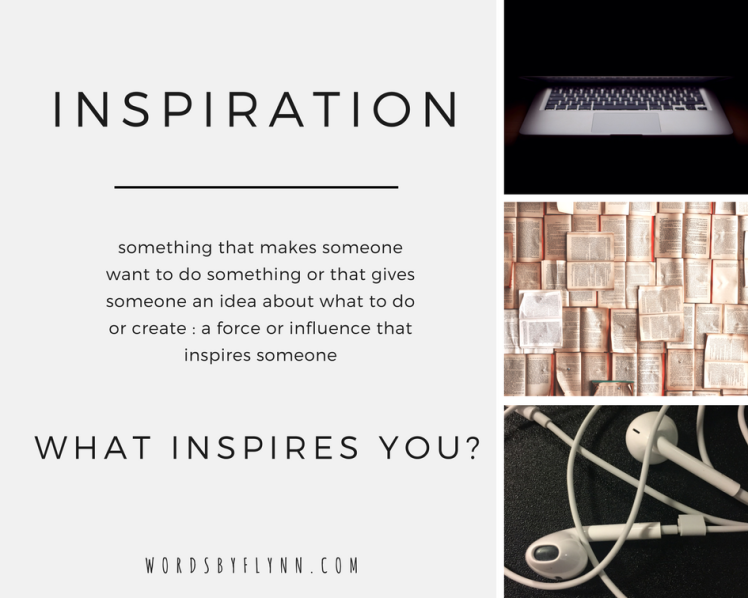 In an earlier draft of  this post, I wanted to discuss what moves writers to act, but it turned into rediscovering what may be the reason of why we write. I do think that inspiration has a part in this process. Sometimes it’s is a writer’s ‘why’ when they write.

I am a big believer in not waiting for inspiration or motivation to hit you. You’ll be stuck in your first draft for a very long time. The feelings of these things are fleeting, and it’s something that we have to keep in mind as writers. Anytime we write, some words will hop onto the page with ease. And there are times you are just left looking at a sentence that needs to be completed.

But I do think the source of your inspiration can become something to keep you moving. One thing a writer can do is write it down and why it inspires/ motivates you. For me, there have been many things that have turned the gears in my brain; anime, music artists and Shondaland, a production company by Shonda Rhimes, shows like “Scandal,” and “How to Get Away with Murder.”

Keep that list in your writing space, or somewhere you will notice it every day. You can even go as far as making it your screensaver. Constantly looking at it will, hopefully, keep the fire burning inside.

The one thing that can stamp that fire out is fear. Whatever it may be, put that fear in a box and lock it away. It won’t serve you as you’re trying to fulfill your goal as a writer. (If you think fear is holding you back, I would suggest dabbling in a short story or fan fiction.)

While on a separate paper write out why it inspires you — what makes you want more of it once it’s done? Identifying this will help with your own writing because it may be a technique that you later put in your manuscript. Break down the ‘whys’ as far as you can go to pinpoint what you like about the certain thing so much.

Here are some of my whys:

“Scandal,”  “How to Get Away with Murder”: For those unfamiliar, these are a couple of Shondaland shows that I love to watch. The complicated plot twists is something that keeps me coming back. The characters are also pushed to their limits, so much so that it’s sometimes unpredictable.

“Yuri!!! ON ICE”: This is an anime that follows a young male figure skater who struggles with anxiety and meets his idol, who  becomes his coach. Compared to the Shondaland shows, the plot is simple and relatable. Having a character to deal with something that people deal with in the real world could hook your audience.

Another way to help rediscover your ‘why’ is to reread your old works. Whether it’s fan fiction, a short story or what you’re currently working on.  Don’t go into editor mode here, try not judge what you have. Remember why you wrote in the first place, and how you were able to get through it.

It may have been because of a potential audience. We all dream/ think about those. We’ve all seen the quote that’s floating around that says: “Someone out there needs your book….” And it’s true. We write to express, to escape our daily lives — and so does your (potential) audience. You need to keep writing to pull them in so that they are avid readers of your work. By all means, don’t wait until your book is out to do it. You can build and grow one now. Give them a taste of what you can do.

So keep writing and I hope you can rediscover why.